MY RESEARCH is in the fields of Geochemistry, Petrology and Volcanology and my work aims to better understand physical and chemical processes that occur in nature and particularly around volcanoes. My efforts strive to better define and comprehend the interplay between formation and use of volcanic rocks and volcanic resources (ore deposits, geothermal energy, building stones, fertile soils) and volcanic hazards for humans and wildlife, and the risks for society and infrastructure in major population centres.

With my research I aim to contribute to several of the SUSTAINABLE DEVELOPMENT GOALS (SDGs) of the UN , including:

2010 - 2016: Elected member of the Steering Board for the Department of EarthSciences (250 employees; served two terms of three years).

May 2007: Promotion to Associate Professor in Igneous Petrology & Volcanology.

Dec 2003: Initiator and Director of Volcanic and Magmatic Processes Group.

The thesis was awarded the grade 'mit Auszeichnung' (with distinction).

The project was funded by the 'Deutsche Forschungsgemeinschaft' (DFG) and through a personal fellowship from the 'Studienstiftung des deutschen Volkes'.

1998: The BSc thesis was awarded the 'de Courcy Duggan Prize' at St Andrews University for most innovative undergraduate research project.

Qualification received from the Chamber of Industry and Commerce of Lower Frankonia, Germany after 3 years of full time employment and practical & theoretical examinations.

Since 2014: Editorial Advisor for Springer Publishing in subject "Geochemistry". www.springer.com

Since Feb 2009: Elected Fellow of the Geological Society of London (FGS).

Since Nov 2008: Elected Fellow of the Mineralogical Society of the UK & Ireland (FMinSoc).

Since May 2007: Elected Fellow of Trinity College (FTCD) for "higher academics achievement", which gives me free accommodation and board in Trinity College for lifetime and Emeritus status after retirement.

Since Jun 2003: Royal Society Fellowship to work at the University of Durham, UK.

Jan 2011: VMSG Award by the Volcanic and Magmatic Studies Group (VMSG), United Kingdom, for "significant contribution to our understanding of magmatic processes over the last few years".

May 2007: Accelerated promotion to Associate Professor at Trinity College Dublin (skipping the rank of "Senior Lecturer").

2005 & 2006: Two Accelerated Promotions at Trinity College Dublin (2 additional increments on the lecturer pay scale) on the grounds of "exceptionally distinguished performance in research, teaching, contribution to discipline and contribution to College".

Sep 2006: I received the degree of "Habilitation à diriger des Recherches" (HDR) from University Blaise Pascal, Clermont-Ferrand, which is the essential qualification in continental Europe (France, Germany, Austria, Poland, Sweden etc.) for eligibility to a full professorship. It is the highest academic degree in France and is awarded for a substantial body of high quality research summarised in a thesis (22 papers in Trolls case). It also requires documentation of teaching ability and that of leadership skills to direct a research group.

2005 - 2008: Elected committee member of the 'Volcanic and Magmatic Studies Group' of the Mineralogical Society of UK and Ireland (three year term).

Nov 2001: PhD thesis was awarded the grade 'with distinction'.

2001: Geoff Brown Prize for best student poster at the annual meeting of the Volcanic and Magmatic Studies Group in Durham, UK.

Studienstiftung des deutschen Volkes is Germany’s oldest and largest organisation that sponsors outstanding students in the Federal Republic of Germany. The fellowship is awarded to first class students only and involved a peer-reviewed proposal, and two independent interviews. It is the most prestigious postgraduate award in Germany (top 0.5% of German PhD students).

Jun 1998: My BSc (Hons) thesis was awarded the de Courcy Duggan Prize for the most innovative BSc research project at St Andrews University that year.

1980 - 1986: Member of the Youth Chapter of the Fire Brigade of Bavaria. Training in Fire Hazard Mitigation and Disaster Prevention.

since 2022: Fellow of the Royal Society of Arts (FRSA)

since 2008: Elected Fellow of the Mineralogical Society of Great Britain and Ireland (FMinSoc)

since 2008: Elected fellow of the Geological Society of London (FGS)

since 2008: Member of the Swedish Geological Society

since 2007: Member of the European Geosciences Union

since 2005: Member of the Geochemical Society

since 2000: Member of the American Geophysical Union

since 1999: Member of the German Mineralogical Society

since 1997: Member of the Mineralogical Society of Great Britain & Ireland 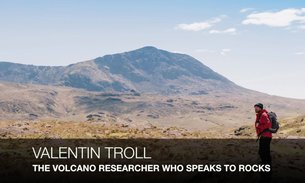